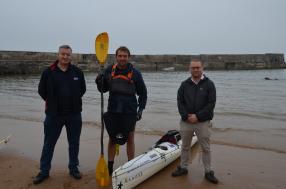 SNP MP for Gordon, Richard Thomson, has joined the Collieston community to welcome a kayaker on a 600mile fundraising trip around the Scottish coast.

Jack Gatacre is kayaking the route to raise money for The Fishermen’s Mission – a cause close to his heart. Jack’s girlfriend’s father has recently retired after 50 years of fishing at Pittenweem near where he lives.

Having seen and heard stories of the harsh conditions in which fisherman work first-hand, Jack set out to raise £10,000 to help support The Fishermen’s Mission in continuing to provide financial assistance, support and life-saving efforts for fishermen and their families.

Collieston villagers held a socially distanced gathering to welcome the pair to shore on Tuesday, with members of the Collieston Community Council and the Collieston Offshore Rowing Club in attendance.

Mr Thomson congratulated Jack on his efforts and thanked him for visiting the village. Commenting, he said: “I was delighted to help welcome Jack to Collieston on the latest leg of his voyage around Scotland.

“He has been on the water in challenging conditions – the recent heat, Scottish winds and some rainy days - but this of course pales in comparison to the sacrifice fishermen and their families make to put food on our tables and the work undertaken by the Mission to support fishing families in the face of adversity and need. Jack’s fundraising efforts are incredible and I commend him on supporting the work of the Mission.”

Jack’s tour route started at Pittenweem in Fife, passing Edinburgh on the way up the Firth of Forth, through the Forth and Clyde canal past Glasgow and on to the River Clyde, before passing the islands of Arran, Jura and Mull. From there they kayaked to Fort William, into the Caledonian Canal and Loch Ness before returning to the North Sea at Inverness, before passing through the Moray Firth to head down the North Sea coast to return to Pittenweem.

Jack said: “I’ve given myself two weeks to get from Pittenweem and back around Scotland – missing out the very north on the advice of my girlfriend’s father. The challenge was something I always wanted to do so I’m raising money for The Fishermen’s Mission in honour of him retiring this year. Starting and finishing where he has fished also seemed special.

“I’ve done between 40 and 50 miles each day and have been treated to some wonderful scenery – it has been stunning so far. I’ve faced some really strong wind changes and the weather can change at the drop of a hat but, other than occasional loneliness it’s really enjoyable. It’s totally different to fishing as I don’t sleep on the kayak, can get up when I like, do the amount I like and have control over that. Fishermen don’t get that luxury.”

Fishermen’s Mission Superintendent Sandy Garvock also welcomed Jack to shore. Commenting, he said: “What Jack’s doing is phenomenal – raising funds and awareness for The Fishermen’s Mission. Awareness is a huge part of our work and this is a great way to garner more public support and involvement.

“As an emergency, 24/7 service, we support fishermen past and present around the whole of the UK from birth to death with anything that they need. We offer assistance relating to their welfare and well being, and are grateful for the support of individuals like Jack.”

To donate and support the cause please visit www.justgiving.com/fundraising/jack-gatacre1