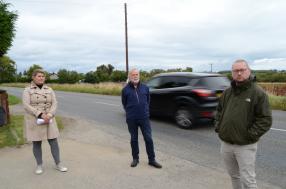 Richard Thomson, SNP MP for Gordon, has joined residents and business owners in their call for improved road safety on the B9001 through Drum of Wartle. Currently, the Inverurie to Rothienorman road passes through the village and only a small section near the A920 junction has a 40mph speed limit.

Mr Thomson visited the area to be told and shown the road dangers by residents. They are calling for the current 40mph to be reduced to 30mph and extended to cover the village as a whole. They are also keen for village signs to be erected to make motorists more careful with their speed.

On his visit, Mr Thomson was shown driveways with a limited view which pull directly onto the B9001 which is an overtaking hot spot, heard of near-misses, dangerous speeds and past accidents.

Commenting after speaking to locals, Mr Thomson said: “As Drum of Wartle has expanded it has become a settlement without any of the right signage which would slow approaching traffic by making them aware of the risks. The road environment, as it is now, is completely unsuitable.

“To combat this, the village signage should be further out to effectively cover all of the settlement and the speed limit should be lower than it is now. The short lines on the road that indicate there are minimal risks and that it is safe to overtake should be replaced with longer lines - particularly near houses and concealed exits.

“As an increasingly built-up area, signage, road markings and the speed limit are all contributing to residents not feeling safe. Due to expansion, the risk has increased since the 40 limit was introduced and the area should be adapted to reflect that.”

Local resident Hilary Fleming is keen for change. She commented: “The main issue is that due to growth, the speed limit is no longer fit for purpose. This is where people live, work, walk and cycle – the road infrastructure needs to be suitable to provide safety and amenity to the local community.

“We welcome the opportunity to show Richard, our local MP, the situation and get his input into the situation. We look forward to working in conjunction with the local authority, agencies, officials and residents to get traffic calming and increased safety measures.”

Mike Lloyd, who owns MLtech at Automet House on the B9001, said: “It is obvious on this bit of road that it should not be a 60 limit anymore. It should be reviewed and looked at. We’re located at the end of the settlement and we want it to be safer for everyone who lives along here.

“It has been like this for a while but the reduction in cars during lockdown really made a difference and people could walk around easily. Now it’s almost back to normal and the risk has returned.”