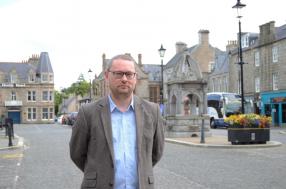 Winner of the 2021 World Cup of Darts, Huntly man John Henderson, has had his achievement recognised in a Motion tabled in the House of Commons.

JOHN HENDERSON AND THE 2021 WORLD CUP OF DARTS

That the Parliament congratulates John Henderson of Huntly, Aberdeenshire, on winning the PDC 2021 World Cup of Darts for Scotland with Peter Wright; notes that this is the second time in three years Scotland has won the title; commiserates with Austria the defeated finalists this time; and wishes John and his many supporters many more victories in future.

“John is a well-known and popular figure locally as well as in the world of darts and is thoroughly-deserving of his success.

“He is a great ambassador for Huntly and for the sport and I send him my very best wishes and congratulations on his success in bringing the World Cup of Darts to Scotland.”