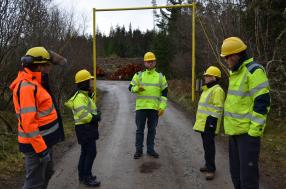 Mr Thomson made the call after making a visit to Pitfichie Forest to see SSEN Distribution engineers carrying out maintenance work in the aftermath of the recent storms.

SSEN Distribution is the company responsible for the underground cables, overhead wires and substations which deliver the power to homes and businesses across the North of Scotland.

While visiting the SSEN tree management team on site, Mr Thomson discussed the various measures being taken by SSEN to maintain their network and to protect the power lines from falling trees, as well as how the company is working in partnership with landowners to ensure that necessary inspections and maintenance work can take place.

The £1m fund has been set up to assist communities to become more resilient in the face of severe weather events and prolonged power interruptions. The deadline for applications for grants, which can be for between £1,000 and £20,000 or in exceptional cases, multi-year and multi-community funding up to a maximum of £50,000, has now been extended to 13 May.

Projects that fit into one of two categories will be accepted:
1. Resilience for Emergency Events - to enhance community facilities, services and communication specifically to support the local response in the event of a significant emergency such as extended power loss.
2. Vulnerability - to protect the welfare of vulnerable community members particularly during significant emergency events such as extended power loss, through enhancing their resilience and improving community participation and effectiveness.

“It was good to be able to meet with SSEN staff and get their perspective from the sharp end of having to repair the damage caused by the recent storms.

“It’s clear that thought has been given to how the resilience of the electricity distribution network might be affected by climate change, and that a great deal of work has taken place since the storms which his ongoing in order to try and minimise the chances of trees causing major damage to the lines in future.

“I would encourage communities to apply for their share of the funding that SSEN is making available. The community response in the aftermath of the recent storms was magnificent, and while the priority is to have a power grid which is as robust as possible in all conditions, it’s also important that communities are equipped and able to support themselves in conditions of extreme adversity, as mercifully rare as those might be.”

The SSEN Resilient Communities Fund Panel, which includes national community groups and organisations with expertise in community resilience planning, will review applications and determine which projects should receive funding, with the successful applications to be awarded this summer.

“The storms which battered the north of Scotland this winter brought with them an unprecedented level of damage across our infrastructure, and as our teams worked tirelessly to restore customers’ supplies, I was greatly impressed by the resilience shown by the communities whose power supplies had been impacted.

“The additional £500,000 contribution we have made to this year’s Resilient Communities Fund in the north of Scotland, increasing our total commitment to £1million, is recognition of the important role community resilience has played in the recent storms.  Since its inception in 2015, the fund has done a great deal to improve community resilience, and we look forward to being able to support our communities even further through the additional funding available to applicants this year.”