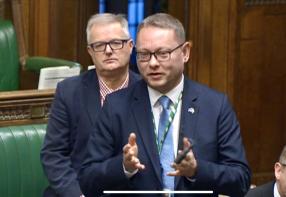 Laings of Inverurie, established in 1862, has had its 160th anniversary recognised by the tabling of a Motion in the House of Commons.

Gordon MP Richard Thomson took the initiative to mark the occasion after learning that the firm was celebrating 160 years in business in the North-east.

“Laings are well-known throughout the North-east and beyond and are one of the largest independent retailers of kitchens, bathrooms and bedrooms in the country.

“Independent local businesses contribute to the lifeblood of our towns and communities and it is right that we recognise this longevity, resulting from providing many years of quality products and service to the public of the North-east and beyond.

“I wish the company and the staff every success going forward and here’s to the next 160 years.”

The text of the Motion in Parliament is as follows;

That this house pays tribute to the continuing success and growth of Laings of Inverurie, established as an independent family business in 1862, who have recently celebrated their 160th anniversary as one of the largest independent retailers of kitchens, bathrooms and bedrooms in the UK; acknowledges the vital importance of independent businesses like Laings to the retail sector and the importance of such business to the long-term economic prospects of our local economies; further commends the owners, management and staff of Laings for their commitment to excellent service to the many thousands of loyal customers in Aberdeenshire and beyond.